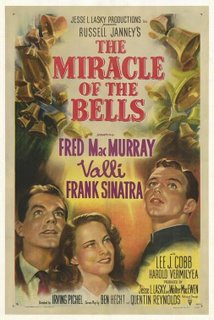 The ever-observant Michele Murphy has recently told me about a classic film that makes several references to Wilkes-Barre and Nanticoke.
The film is Russell Janney's The Miracle of the Bells. It was directed by Irving Pichel (Mr. Peabody & the Mermaid), who was born in Pittsburgh. The screenplay, based on the novel of the same name by Russell Janney (of which there are two copies circulating in the Lackawanna County Library System) is by Ben Hecht (1932’s Scarface, His Girl Friday, Hitchcock’s Notorious, as well as uncredited work on 1962’s Cleopatra and Queen Christina with Greta Garbo) and Quentin Reynolds, with additional dialogue (uncredited) by DeWitt Bodeen (Cat People, I Remember Mama and the 1950s TV series “Mr. & Mrs. North)--none of whom hail from Northeastern Pennsylvania.
The film stars Fred MacMurray (Double Indemnity; TV’s My Three Sons), (Alida) Valli (Orson Welles’s The Third Man, Les Yeux sans Visage
Furthermore, location shoots for The Miracle of the Bells were done in three areas of Luzerne County--Wilkes-Barre, Plains and Glen Lyon.
The film begins at a train station in Nanticoke, PA. Determined to fulfill her final request, a Hollywood press agent (MacMurray) brings the body of an actress (Valli), who died from tuberculosis after making her first and only film, back to her hometown of Coal Town, Pennsylvania for burial. The film tells in flashbacks how fate threw Olga and Bill together, their reunion in Hollywood where Olga (originally a double for the lead actress) is herself cast in the lead role of Joan of Arc in a major Hollywood film, and her death from tuberculosis a day after filming was completed. To arouse public interest, and to get the reluctant studio head to release the film, Bill teams with a local kindhearted parish priest (Sinatra) and creates national publicity when they urge (and bribe) the priests of 5 Coal Town churches to rung their church bells nonstop for three days. The result is, indeed, a miracle.
The first reference to Wilkes-Barre occurs during a flashback on Christmas Eve in Ming Gow’s Chinese Restaurant following a chance meeting between Olga and Bill after a performance. After dinner, Olga and Bill have the following exchange:
Olga
I was born in Poland. When I was quite young, we came to America to a place in Pennsylvania called…Coal Town. Little Poland.

Olga
Yes.
In the following scene, back in present day, a shyster funeral director Nick Orloff (played by Harold Vermilyea), who is exorbitantly arranging Olga’s funeral, has the following exchange with Bill after returning from organizing the service:
Nick
Didn’t keep ya’ waiting too long, I hope?

Bill
Ya' got everything fixed?

Nick
Yessiree. I had a big talk with Father Spinsky, and he worked everything out fine. He’s gonna’ give ya’ a solid requiem mass. And I got hold of a singer from Wilkes-Barre. She just happened to be in town.

Later in a montage of newspapers headlines showing the nationwide publicity for the 3 days of ringing bells, a copy of the Wilkes-Barre Sun appears with the headline:
“PENNSYLVANIA’S OWN MOVIE STAR HONORED BY BELL CEREMONY”
When the other parish priests are trying to convince Bill to hold the funeral at a larger church to accommodate the growing crowds of mourners, funeral director Nick exclaims at one point:
Nick
There’s a busload of sightseers in from Wilkes-Barre already.
XXXXXXXXXXXXXXXXXXXXXXXXXXXXXXXXXXX
In additional to the Wilkes-Barre references, there are also several references to Nanticoke, PA in Miracle of the Bells.

The railway station Bill arrives at with Olga’s body is in Nanticoke, PA. A sign also states this fact.

The Nanticoke Journal is mentioned several times as their newspaper.

Nanticoke is also mentioned twice in the following scene between Bill (MacMurray) and Father Paul (Sinatra):
Bill
Father, how much is the bus fare to Nanticoke?

Bill
Will, a dollar oughta cover it.

Father Paul
Will that be enough?

THEN
(FADE INTO)
NANTICOKE TELEGRAPH OFFICE

Bill (to clerk)
Are you sure there isn’t a night letter lying around Wilkes-Barre?

XXXXXXXXXXXXXXXXXXXXXXXXXXXXXXXXXXX
The 1946 novel Miracle of the Bells by Russell Janney, which mentions Wilkes-Barre, Scranton or Nanticoke on practically every page, is also available to borrow from the Lackawanna County Library System. Click here to place a hold on the novel.
Much thanks to Michele Murphy for this reference.

UPDATE 4/7/10 I found this clip of Miracle of the Bells on YouTube. The 1:27 mark begins Valli's speech where Wilkes-Barre is first mentioned in the film ("I was born in Poland.".
Posted by Reference Department, Albright Memorial Library at 8:18 AM

Do You Know Of A Reference to Scranton or Wilkes-Barre In Entertainment That I Missed?
By All Means, Email Me

What Bill's Been Readin'